Who is in the "i am in" Haringey Council video?

Who do you recognise in the video released by Haringey Council as part of the new logo and brand identity change?

I recognise Mat of Craving Coffee, and somebody in the McAslan show-shop on Tottenham High Road.

But struggling on many faces?

Am interested because Councillor Kober says video features residents in their own words explaining the change of identity.

I guess most are residents. But some are paid staff and a few are businesses that have benefited from council funding.

So, who do you recognise?

Tags for Forum Posts: haringey council video, haringey regeneration, i am in haringey

Was the man with the oil painting the curator of Bruce Castle (who I saw giving a fascinating tour on Open House Day)? You could only see his back, so not too clear. Possibly he was edited out for not having a beard or plaid shirt.

It is advertising that is very much of its time - perhaps they'll be releasing a Christmas single.

The curator is Deborah Hedgecock. Could have been Rob, the assistant curator.

Ah, that would be it - I missed his introduction.

Permalink Reply by Michael Anderson on September 25, 2015 at 8:00
There you go Pavlos
https://m.youtube.com/watch?feature=youtu.be&v=LssVe6rOlzo

Where is the bakers shown in the video? Looks good. Going to assume Tottenham way though given that most others were Harringay/Alexandra Palace area

When members of this website mention a local business it's usually to spread the word about something new; or interesting; or where they've bought good products, enjoyed a meal, had good work done for them etc etc.

Occasionally people have a gripe about the service or the quality of what's on offer. Which hopefully, is constructive criticism which can lead to improvement.

I've sometimes recommended businesses - many local, or occasionally somewhere further afield. I base what I write on my own experience. And see it as another way of saying 'thank you'. 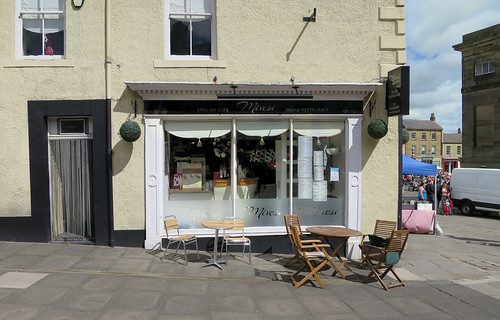 But when this is done by a local elected borough Council - not some vague amorphous entity called Haringey - I want to see fairness and some ground rules which ensure a "level playing field".  Instead our Council has chosen to use public money, its staff,  and its privileged position to grant free advertising to individual businesses  which it selects.

I don't blame the businesses. Nor, I imagine, would someone running a restaurant complain if Haringey Council gave them a quarter page ad in a local leaflet. But I wonder about the apparent lack of rules when a borough council has a few specially favoured businesses.

Even more worrying is the new short video "Invest in Tottenham".  This is, pure and simple, free paid-for publicity at the public expense.  Mainly for two large businesses: Lee Valley Estates and - to a lesser extent - Tottenham Hotspur.

The images chosen for this video once again present the inaccurate message that "Tottenham" is a narrow strip along the eastern part of Haringey consisting mainly of Hale Village and Spurs Stadium.  It shows artists' impressions of developments without making it clear that they are as yet unbuilt.  (And perhaps in some cases not yet with planning permission.)

Both on the Council's website and in the video, the same outright lie is repeated: that Tottenham "... is already seeing the benefit of more than £1billion of public and private investment to transform the area."  Such sums have not been invested and much of this figure is based on rough estimates from future developments which may or may not happen.

It's one thing to talk-up an area and take pride in its people and its achievements.  But a local authority should strive to give a balanced, truthful and objective view.  Including what's good and not so good. Instead, inventing double-plus-good propaganda is out of the pages of the novel 1984. Or perhaps the sort of thing we might expect from the worst carboot sale hucksters; or the most unscrupulous estate agents.

Permalink Reply by Michael Anderson on September 25, 2015 at 14:29
Hang on Alan. I just did a quick Google of two other London boroughs, Westminster and Camden, and they both have promotional videos on You Tube where local business are explicitly mentioned and featured. Im sure if I'd had the willpower and interest I probably could have found similar ones for most other boroughs.
I'm not sure how you can have a film that includes local businesses where you can't actually mention local businesses!

Permalink Reply by Michael Anderson on September 25, 2015 at 16:48
I'm assuming the film isn't just for people who live in the borough but to promote it as a place for business. The Camden one I looked at was focussed on why Bloomsbury is great and had locals talking about how much they loved small businesses like Alara in Marchmont Street and small independent shops in Lambs Conduit Street as well as it being a place to walk around and enjoy. The Westminster one was about the West End festival and focussed on what the West End is know for, theatres,and cinemas, and explicitly featured those.
I think that if they are going to use this film to attract business (which would at least go someway to help justify spending the money) pretty generic stuff wouldn't be that convincing. The faces of real people who work here would carry more umph.

But is the selection in any way fair and balanced?

The video is two minutes 12 seconds long. I'm sure you noticed the main focus was on Hale Village (partly unbuilt). And the new Spurs Stadium (unbuilt). Yes, there are a couple of seconds showing Windsor Parade refurbishment - completed in 2007. Two seconds of Bruce Castle. (Neither, as far as I know, were connected to the post riot money.) It has some oranges in a crate near St Loy's Road. Then Seven Sisters Station - for obvious reasons the successful Wards Corner businesses are not "celebrated".

But please send me links to the two videos you viewed. I'd also like to compare and contrast.

Permalink Reply by Michael Anderson on September 25, 2015 at 18:58
Here's the Bloomsbury one. I'll see if I can find the Westminster one when I've finished making fish cakes!
https://m.youtube.com/watch?v=8ok9ZHLNKnA

I can see a bit of overlap. Though the vox-pop publicises the local parks - which is nice. And there's some free advertising of Alara and Gay's The Word bookshop. (With a peek into Skoob Books!)

Overall though, it has a different approach and feel. Partly because it focuses on one small area. And the businesses it names are small independent businesses. Not large rich corporations. (As with Haringey's fawning over Spurs and Lea Valley Estates.)

I spotted that Camden posted a similar video in Camden Town- by the same filmmaker, Jack Latimer. Again it does a vox pop - but this time with people randomly recommending businesses they like.  My favourite is the woman who recommends "Freda Kayhole". Lovely.

Permalink Reply by Michael Anderson on September 26, 2015 at 7:05
I think they did a bit a series, each focussing on a neighbourhood, as part of the "Love Camden" campaign a few years ago. They did take a different tack and from the look of them they were fairly inexpensive to make. In addition to these I remember some also aimed at the tourist market as Camden Market always comes fairly high when you Google the word Camden.