As a result of that piece, an ex-resident of Hornsey got in touch to offer me his father's collection of programmes for a season of shows hosted at the theatre in the summer of 1949. He also sent me a photo of one performance.

It was an exceedingly kind offer. So, a big thank you to Mike Ellis of Hoylake!

So, 71 years ago, this week, if you'd been looking for a local diversion, you could have dipped in to the Finsbury Park Open Air Theatre's season of Light Opera. 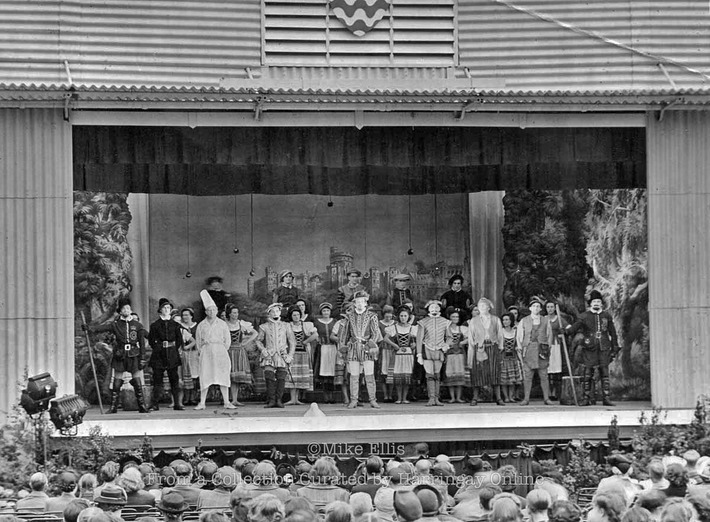 Merrie England, the first show in the Finsbury Park Open Air Theatre Season, 1949. Jack Ellis as Long Tom, is on the far left.

The season looks like it was an ambitious one. Not only were the organisers dealing with the issues of post-war Britain, they had to contend with the English summer! But weather records suggest that they may have had good luck that year.

There was a cool and wet start to June. On the 1st, over 7mm of rain was measured, and the maximum temperature on the 3rd was only 14.8°c. Significant rain only fell on 3 days during the month, and after the 14th it was completely dry. Temperatures slowly rose, and although days were pleasantly warm some chilly nights occurred. During the last week it became very warm or hot with some warm nights. On the 27th, the maximum temperature was above 29°c.

Wouldn't if be fun to have the theatre there today.

Thanks to you, Hugh, and Mike Ellis.  We were still emerging from wartime austerity but the atmosphere was one of hope and anticipation rather than doom and gloom.  Not a bad time to grow up really.

I used to go with my mum early 1950’s on Saturday evening and I loved it they were mainly amateur drama groups,it could be before main evening performance.