The LCSP (traffic sub-group) and Living Wightman have contributed recently in the development of a resident led submission to Haringey in relation to traffic and the Ladder. I am pleased to share the "Fresh Start" document with you below. I have also copied the email circulated to the LCSP membership setting out the context of the Fresh Start document.

I am also pleased to share a joint letter from the LCSP and Living Wightman to Haringey setting out a request to extend the current Wightman closure until the Green Lanes Traffic Study reports back in December.

We welcome any constructive feedback and thoughts, and importantly ideas!

You will no doubt be aware of the fact the Green Lane Traffic Study is in progress. To contribute to this process the LCSP has coordinated with the Living Wightman Campaign to prepare a resident led submission document that has gone to the council. The “Fresh Start” document aims to characterise the problems faced by many Ladder residents as the Ladder has increasingly become a sacrificial zone as a result what has historically been weak traffic management planning on Green Lanes.

The document sets out the impacts of this weakness in planning, and how the application of ever more pressure on a narrower subset of roads in the borough to act as a relief valve has affected the Ladder.

The document is designed to provoke thought and offer insights to decision makers and influencers who may not be familiar with the area. The document goes further in proposing a partnership between the council and residents in what will hopefully be a long term effort to fundamentally change the profile of traffic flows across the Ladder and surrounding areas.

We also jointly make recommendations as to actions that can be taken to begin making meaningful progress in reducing the traffic burden on the area. We recognise the solution may not be a result of a single intervention, and as a result, as the Green lanes Traffic Study progresses, the Fresh Start document is designed to be a living document, which we hope to add to at appropriate moments and re-circulate to keep the discussion alive.

For those of you with feedback you are welcome to contact myself in the first instance.

Please note, the traffic sub-group will aim to meet next week. We do not have a date yet. We welcome the ongoing participation of Ladder residents, and if anyone would like to come along, or represent their road please let me know. You will be most welcome.

In my opinion, they are there for one overriding reason: to afford ready access to the houses and schools that line the streets.  For example, this is access by the residents, by their visitors and by delivery services using any means of transport that is suitable for the streets as they were built.

The one thing that our narrow residential streets are certainly not for is vehicles (with the exception of bicycles) that are just passing through.

Our streets also provide a public space in which residents can encounter neighbours – this is in contrast to the gardens at the back which are private spaces.

The streets also provide a vital route by which fixed public services can reach all of the individual houses:  sewers with a connection from each house, separate rain water drains from some houses and street drains along with their gulleys and grit sumps, gas mains (three of these in the case of Wightman Road – two at low pressure with a connection to each house and one medium pressure), electricity mains (low voltage distribution cables with a connection to each house and street light and higher voltage cables to the sub-station transformers), water mains serving both individual houses and fire hydrants, BT Openreach telephone cable ducts in which there are cables serving either each house directly or, in some streets serving poles from which overhead cables to houses are hung, these ducts also route optical fibre cables to street cabinets from which copper wires go onwards to houses, Virgin Media cable TV ducts in which various types of cable are located serving houses individually.  All of these services have access openings in the surface or in cabinets.  There is also quite a bit of street furniture, such as street lights, road signage, dropped kerbs for wheel chairs, safe crossing islands, flower planters, safety fences etc etc.

Because the ladder streets are about 130 years old, some of the underground plant mentioned above has expired and been replaced.  For example the “Victorian water mains” were replaced a few years ago to reduce leaks.  At present in Wightman Road a major project is going on to replace some of the old cast iron low pressure gas mains.  The old gas mains (12” in diameter) are being left in place and new plastic ones are added alongside so the underground space is becoming increasingly cluttered with pipes, ducts and cables including the abandoned ones.

The deterioration in the old cast iron pipes and sewers has been hastened by the passage of heavy vehicles on the carriageways (which were not built for such weights) and by car parking on the footways (which are also not designed to bear even these lighter loads).

Since the beginning of mass motoring in the 1960s the ladder streets have also increasingly served as car parks for residents’ cars.  This tendency led at one stage to the planning authority seeking to restrict the number of flat conversions because it was thought this would increase the demand for parking beyond the space available.  As it has turned out, the number of cars in the ward seems to have stopped growing (despite the continuing increase in households and population) just before the maximum street parking capacity was reached.

To summarise, I would say that the residential streets of the ladder are for all these things, including children riding bicycles and even playing where it is convenient and safe and that all motor vehicles should proceed at a pace that respects this.  Residents and their visitors probably wouldn't need to be told.

Dick, I don't think that my two questions are " deceptively simple ". They're just " simple ".

Yes, of course public services can be laid UNDER the roadways and, once laid, there is no conflict between that use and the traffic.

But, when we want to use the roadways as playgrounds, what do we have to do ? Why, close the playstreet to all traffic. If a resident of a playstreet  needs to access or leave his home he is, quite rightly, preceded by a marshal in a way reminiscent of the Red Flag Act.

To my mind, this clearly shows that children playing in the street is incompatible with any kind of traffic, even If you only want your organic vegetables or pizza delivered to your door.

Here is an example of the messy state of what is under our streets.  This one is at the corner of Hewitt and Wightman Road.  It shows the newly installed gas main (yellow) in a trench that lies alongside a huge iron pipe - also gas.  Such is the disorder under the surface, it is almost impossible to open such a trench without damaging something else that is there.  In this case, the digger has clearly broken open three green plastic ducts (probably cable TV) and one grey/green duct.  These were installed above the iron pipe and therefore too near to the surface.  Conventionally, all of these pipes should be under the footway but it looks as though this was prevented by the presence of a street drain and by whatever is under the cast iron inspection cover - possibly a water main valve. 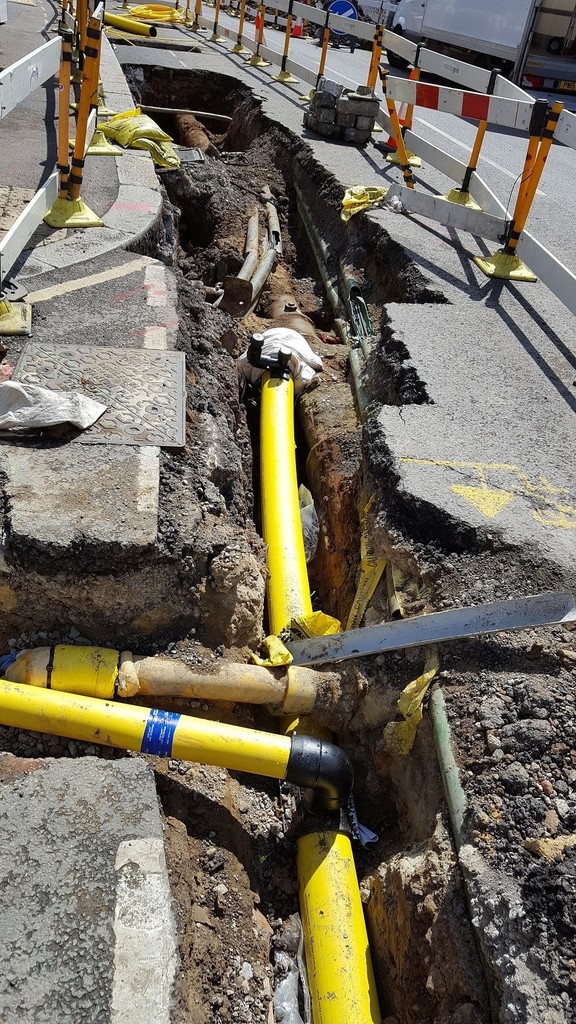 I noticed they had broken those ducts too, Dick. I think the little digger has also managed to crush the dropped kerb on the other side. As you say, these narrow old roads and certainly the pavements were not built for carrying motor vehicles.

Actually the digger was not the culprit in that case.  It was great load of builder's supplies trying to turn into Hewitt Road. See the following picture.  The Council have already been alerted (and they have replied saying "This email is to let you know that we have inspected the highways problem at Wightman Road, N8 Hornsey that you reported and we have instructed our contractor to carry out repair works. We will let you know when the works has been completed to our satisfaction." 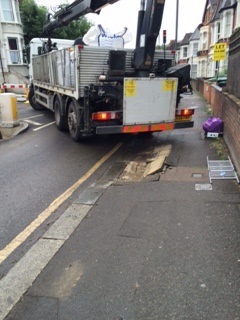 And I wonder who will end up paying for it...

Nearly two months later the dropped kerb is still looking like this: 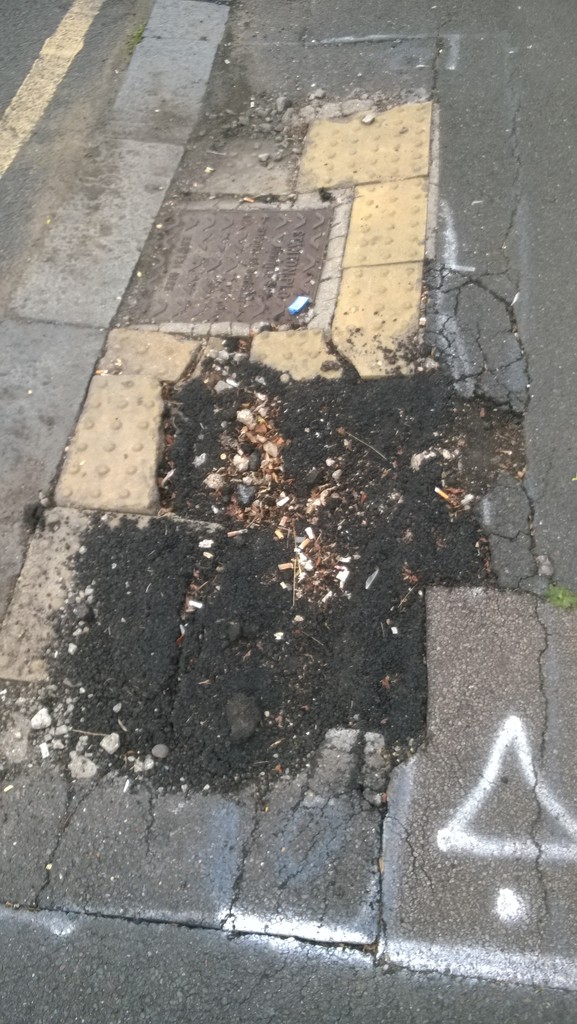 The photo shows what a mess it is but perhaps not how uneven. These dropped kerbs are supposed to assist wheelchair users and buggy pushers cross the road safely, but in its current state they, and other pavement users, are more likely to tip themselves headlong into the traffic.

I have reported it via the Love Clean Streets app...

This is a great document and I'm really impressed with the work that's gone into this.

I'm wondering if there are ways to include those of us who live in neighbouring Stroud Green Ward and who, for various reasons, also appreciate the current quiet state of Wightman Road.

A meeting in the library might be a possibility.

You guys are unbelievable!!! What makes you think you're more deserving of peace and quiet than Green Lanes residents??? We have had to put up with UNBELIEVABLE levels of traffic, noise and pollution since Wightman road has been closed for works, and you want this to be an ongoing thing?!? The level of selfishness expressed here by Wightman road and ladder residents is staggering...

OK, we'll go back to the traffic we had and you can stay with the traffic you have. Thanks.

Just out of interest though, did you read the document? Did you see the map? This is about a fair and equitable distribution of through traffic and the rest of the borough has decided that it doesn't want it on residential roads. Yes it seems ridiculous to completely close Wightman Rd but that is the ONLY way you solve the traffic problem for the ladder.

Calling "us" unbelievable, selfish, more deserving and staggeringly selfish is pretty mean Chris. In fact I've lost a bit of sympathy for your position.

I'm not looking to be mister popular on those boards, as I realise Green Lanes residents are somehow under represented on them, but come on: you can't expect us to keep on putting up much longer with the type of traffic we've seen for the past two months! Sure, ideally both Green Lanes and Wightman road would be pedestrianised and we'd all have a lovely time walking and cycling around the place, but unfortunately that is not going to happen...