Went for a walk round Downhills Park today and was shocked to see the massacre of trees and shrubs along the boundary with Downhills Park Road.  Does anyone know what is going on and whether there was any consultation over this.  I walk through the park fairly regularly and haven't seen any signs warning this was about to happen or explaining why.  I understand that sometimes shurbs have to be cut back but this is taking it to extremes and to my mind has ruined what was an effective green barrier between the park and the road outside.  It has also destroyed extensive bird habitat as well as some beautiful holly trees in berry.  Worryingly it looks like further sections are scheduled to be destroyed very soon. 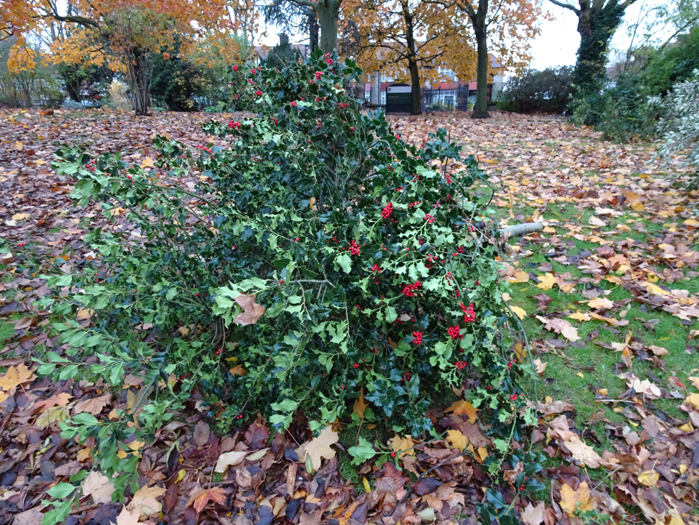 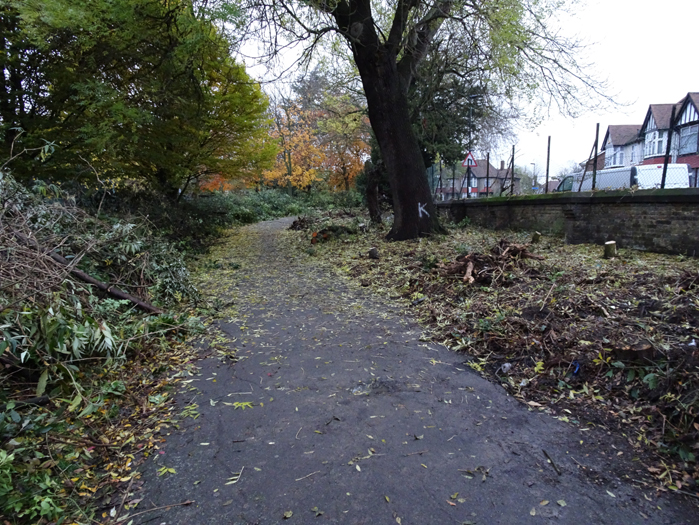 Shrubs removed from right side and piled on the left 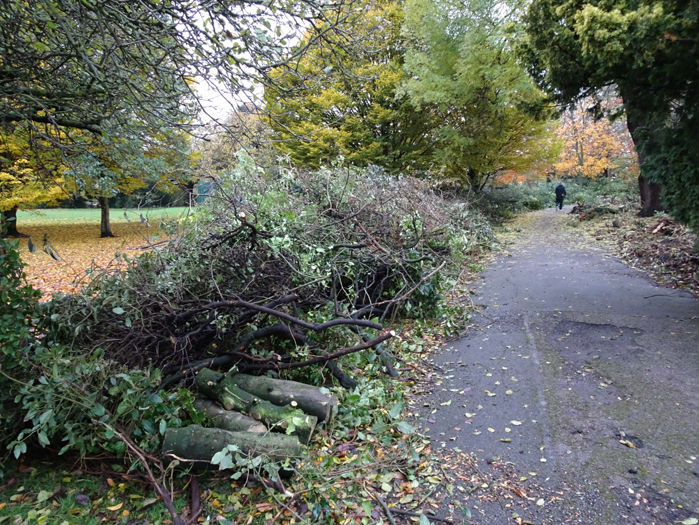 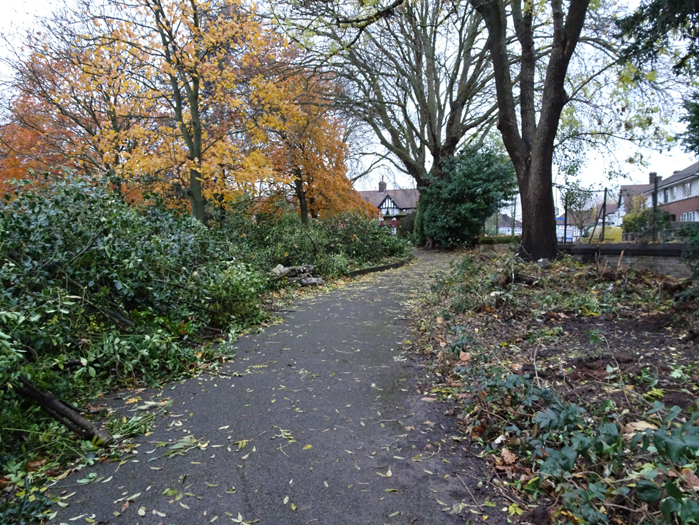 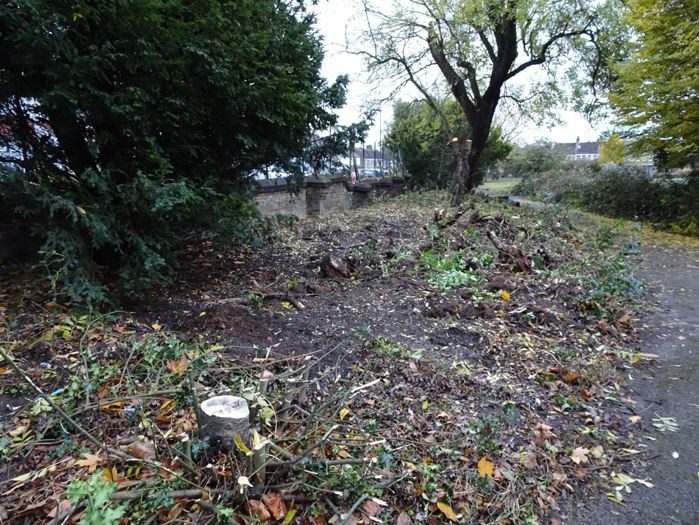 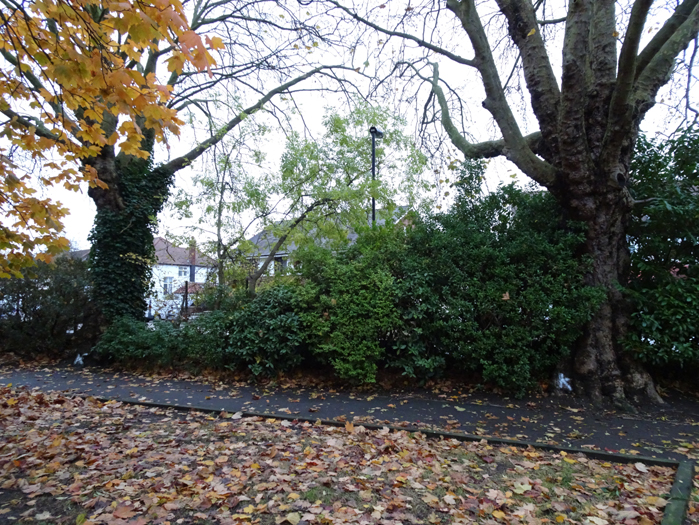 Looks like this section is next for the chop - presumably the ugly 'k' sprayed on the trees means 'keep'.

Permalink Reply by Norah Borough on November 21, 2016 at 8:12
Bushes are sometimes removed for the safety of the public. Less hiding places for potential attackers...

This destruction is too extreme.  Yes cut back in places where blind spots have been created, but there shouldn't be destruction of greenery and wildlife habitat on this scale.

This is a massacre indeed an act of vandalism. I did not hear of any consultations regarding this although I have heard rumours the council wants to make it "a low maintenance park". Surely full grown hedges are low maintenance! they require a bit of trimming occasionally. They protect the boundaries of the park from pollution, they provide homes for wildlife. Many people talking about this on FB and twitter.

Yeah. The best way to make it very low maintenance is to not have a park at all!

You know like if you have a headache you cut your head off and tehn the headache is gone for ever!

It's the same with safety...you can't just go around cutting down shrubs IN A PARK because the shrubs give people the possibliity to hide in them!

Residents have no effective control over what happens to our parks and green spaces. People only express concern when nasty things appear to happen and that's way too late - we only have ourselves to blame.

Like many Councils, this one is secure in its majority so politically there is no opposition - they can do what they like because they're so good a defeating opposition from residents and nobody else even bothers.

There is no easy way for residents to get a handle on whether the Council are doing well or badly - look around you, how well do you think the Council are doing?  It's hard to even have a view as it's not easy to derive standards or make a comparison (what with?). How much green space should we have, what should be cut first, how many trees, shrubs, what level of information should be provided to residents, when and how etc.

Only when you look into it do you begin to get a sense of the challenges and any successes.

There has always been a small core of local people who's concern for our environment is sufficient for them to get involved. That may have been OK before austerity but those few brave souls are far from enough today.  With massive budget cuts the axe falls where it is least visible I guess. As most people haven't the faintest idea of what is being spent where, cutting green budgets seems an easy option.

Meanwhile, as in everything the council do, behind all the political considerations are two levels of Council Officers - the middle managers and above who 'run' the organisation and the 'practitioners' who direct the work, usually through subcontractors due to the right-wing need to strip councils bare of employees.

In theory, Cllrs instruct the managers who get the job done. In practice, nobody can do anything without the practitioners who possess expertise that cannot be replaced otherwise it would have been by now.

In general, the practitioners know exactly what they're doing - they're well-qualified and often devoted to public service. If you were an expert why else would you work for a council - they pay badly and sack people all the time, making life harder.

The only way I can see is for local people to keep a handle on what happens on their manor is to get directly involved themselves. Look over the shoulders of the practitioners in order to take the managers and Cllrs to task. If we don't do this, we get politically 'spun' reasons for everything that happens as if it was the only possible course and sod off for even daring to ask.

Many people all over the place seem to have come to the same conclusion. That could be why there's been a huge increase in the membership of 'Friends of Parks' Groups.  They meet regularly as a group of groups and try to put pressure locally, regionally and nationally. They've realised that unless they can force central  government to make new laws protecting our green spaces (they're unprotected at present), they'll all eventually be destroyed.

Presumably, our ancestors never imagined we'd be prepared to sacrifice our green spaces at the altar of austerity and left it up to local councils to find the money somehow, confident that their legacy of 100% public ownership would protect 'in perpetuity'.

They could never have imagined that a policy of austerity would lead to publically-owned space being sold off for a quick hit of cash to pay for immediate public needs - when that cash is exhausted, sell off even more - what else can Councils do?

I guess many people are still of the mindset that we pay our reps to represent our interests so we don't have to bother getting involved but that strategy clearly isn't working.  You have to get involved yourself, particularly if you want to earn the right to be listened to. The context in which stuff happens is increasingly a difficult one to reconcile and often lacks basic knowledge of facts.  This in a world where most people seem to hate on the Council and can't be bothered to even vote, let alone respond to surveys etc - they agree with Russell Brand.

How can you have a view, for example, as to which trees should be protected and which removed if you don't know how many or what type exist nearby and across the borough?  You can't ask the practitioners - they are far too busy firefighting the effects of the cuts to hold teach-ins.

You have to get involved, to go along yourself, meet the people involved, learn about this domain and understand how you can add value

It's the modern way.

hi - got a reply back from the Tree & Nature Conservation Manager.

It all seems good:

'Four large trees are to be removed in the bed opposite the café. They were previously reduced in size as they were either dying back or been colonised by decay fungi making them hazardous. Extensive decay cavities and fungal brackets are visible on the trees. We are now planning to remove these trees completely as the area is to be replanted. The trunks will be relocated to the woodland area to use as wildlife habitat and natural play features. At least 20 new trees will be planted in Downhills Park during the 2017/18 planting season in co-operation with the Friends of Downhills Park group.

Three other areas of woody vegetation are also being cleared as part of the parks service new landscape strategy. These will be replaced with more attractive herbaceous plants. Signage was put up to inform park users in October and we also consulted the Friends group. These dense shrub beds were a haven for anti-social behaviour, including rough sleeping. High volumes of rubbish had also built up in them, which has now been cleared. The new planting palette will include many flowering species, which will improve the appearance of the park and increase biodiversity.

"anti-social behaviour, including rough sleeping" I really do despair at how people talk about the homeless now. When I saw the cutting back the first thing that crossed my mind was "I bet it's because people were sleeping in there".

"Rough sleeping" = sleeping outside, presumably because you have nowhere to sleep inside.

I agree.  I don't like the fact that people are sleeping in the bushes but the solution to that is rent controls so that there are places people can live inside.  It's overcharging landlords that are anti social, not homeless people.  As for 'high volumes of rubbish had built up in them' that just means no-one had been picking up that rubbish, so the simple solution is to make sure that job gets done.  Neither of these excuses justifies the wholesale massacre of what was good wildlife habitat and a very valuable green barrier between the park and the road.

Permalink Reply by Lauren on November 23, 2016 at 2:02
They've cut back the bushes where the man was living near The Finsbury too.