More details on traffic management offered by the Liveable Crouch End project have recently been made public by the Council.

A proposed trial will mean the following changes to roads in Crouch End and Hornsey: 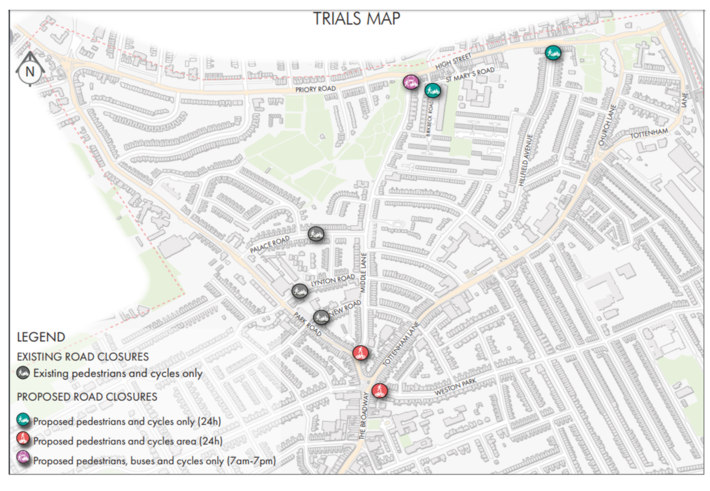 Crouch End councillors have organised a meeting to look more closely at the proposals.

Put away any envy you may feel at traffic management with teeth and following this development may give pointers for what could be possible in Harringay.

Try as I may, it's difficult to avoid musing over the hundreds of thousands of pounds spent on a Harringay traffic survey for such little result and comparing that to what's happening in the areas to the west of Harringay and to its east. One is getting, and the other is investigating the sort of traffic management of which, it seems, we can only ever dream.

I think this might do a great job of making Crouch End unnavigable for drivers.  Whether this is a good thing however, I am not convinced.  I am not a car user - I actually hate cars and have done so since a childhood spent (as it seemed to me) continually in cars.  But reality people need cars to get about, whether I, or traffic planners, like it or not.

For example: I have a very elderly father who needs a cab to get anywhere.  We live just off the Park Road end of Middle Lane and at present we need to visit the Queenswood Medical Practice on Park Road on a more less weekly basis by cab.  If the cab parks outside our house facing Tottenham Lane then he needs to turn round in order to use Middle Lane to access Park Road without having to drive miles round.  In the suggested new scenario with Middle Lane, we will no longer have access to Park Road regardless without driving miles round, ie up to Priory Road, then annoying the local residents there by cutting through Park Road South, or continuing to the bottom of Muswell Hill then along Park Road.  Thus a 5 minute vehicle journey will be at least doubled - more if lights and traffic are against us - and of course traffic there will be heavier with displacement from Crouch End.

So, while I hate the traffic and general danger of Middle Lane (if only there were a proper crossing between the Park Road end and by Priory Park), I am not convinced by this proposal - or rather, its ramifications.

Perhaps it isn't as absurd as that previous proposal for paving around the Clocktower but still....

Frankly I don't understand why people use cars in London except in cases of dire necessity but for some reason cars make people feel good about themselves.  That's the real problem.

I would also add that I consider the Wightman/Green Lanes conundrum to be a far greater traffic management priority than Crouch End.

I agree with most of this, except that there are people who do really need to use cars sometimes, the elderly or disabled, for example, people with children, tradesmen, etc., not only in cases of 'dire necessity', and allowances need to be made for this. And as someone who lives just off Middle Lane, I don't see it as particularly dangerous. This whole proposal seems to me unnecessarily complex.

It would be nice if there was a solution which promoted healthy travel modes and reduced air pollution which didn't inconvenience anyone at all - especially the elderly and disabled - but unfortunately any change will have winners and losers. We need to look at the bigger picture and try to weigh them up.

For example, this scheme seems to offer kids at the Rokesley schools a chance of breathing cleaning air, while also encouraging more of them to walk or cycle to school rather than be dropped off by car. No doubt the situation is more complex than I'm painting here, but if the consequence of that is that vaneska's dad might spend 5 minutes longer on his weekly taxi journey to the doctor's, I think that's a price worth paying.

I would add that of the roads listed above, Middle Lane is the only one with any volume of traffic.  To be blocking off these relative backwaters makes no sense to me when there are such urgent issues elsewhere.  I don't even think the traffic volume on Middle Lane is unbearable - I think the priority should be preventing access to vehicles over a certain size, keeping speed down, and improving ease of crossing for pedestrians.

I really wish that the people who are applying so much energy to thinking up these schemes would address these energies to the borough as a whole.

The backwaters must be closed otherwise they would take the traffic that Middle Lane now does.

The question of Park Avenue South has been raised. As the trial currently stands it will become a rat run which drivers will prefer to navigating the traffic lights at the foot of Muswell Hill

Not sure that they have abandoned the square round the clocktower, this is just an experiment to show us how *wonderful* it will be if we all walk or cycle - of course it will be an inconvenience to many but such a wonderful gesture - wait and see what wasteful lunacy they actually come up with...

The square round the clock tower is still in the plans, as indeed is everything else that was there when the plans came to light quite some time ago, via a Freedom of Information request. Despite the supposed consultation almost nothing has changed.

And no , the purpose is not to show us how wonderful it is, but to test a hypothesis that closing the , surprisingly busy residential road, Middle Lane, will improve the liveability of the traffic reduced area. A est that would carry more weight if the hypothesis were stated clearly and the predicted results published in advance, rather than retrospectively.

Permalink Reply by matt on September 20, 2019 at 8:51
So all traffic onto Park Rd & Broadway - Church Lane/Tottenham Lane. It's just following what inner boroughs have being doing for years. It does mean more mileage and sitting in traffic belching out more fumes. The only thing that's efficient is banning car ownership and shifting over to public transport/taxi-uber/hire car by minute-hour/walking-cycling.

The ULEZ is pushing things this way as most vehicle owners will soon have to make that vehicle investment decision again as their older vehicle becomes unusable. Many won't bother or will at least go hybrid or fully electric. The new Tesla Model 3 was no.3 on the UK buying list in August ... starting at £36,490 :)

so I thought if I have to pay the ULEZ I might as well get my money's worth.

was thinking of one of these

Should be a great, no one's going to complain about the festival noise any more, you just won't hear it.

Seems relatively sensible trying to push the traffic on to A roads, however I'm not sure exactly how much improvement it's likely to make as I believe Park Road and Tottenham Lane already carry the bulk of the traffic (hopefully at least some). The main issue I see in Crouch End is the large amount of traffic in the center which multiple lanes of traffic around the main shopping district (similar problem with Green lanes). The only thing with these is to find a way to discourage traffic through these areas which would make other options more attractive.

Eliminating non-local traffic from local streets whereever possible is definitely the way to go, forcing through traffic to use the intended A-roads. It has both a carrot and stick effect to increase the "active travel modes" - the local streets become more pleasant and safer for walking and cycling, and also some short local journeys are less convenient/slower to make by car - walking and cycling start to become the fastest modes for shorter journeys.

Totally agree, I was more meaning the center of Crouch End is the junction of two A roads, I'm not sure how the address that situation. It's much like Green Lanes would be a far nicer space if it wasn't for the A road running though the middle.

I guess we've just gotta keep chipping away at the situation. I'm hoping the e bikes (Lime, Jump etc) keep pushing further out as they provide a great way to get around especially for people who aren't able to use a non e-bike for what ever reason. However there needs to be more cycling instructor still otherwise people won't feel safe to do so.