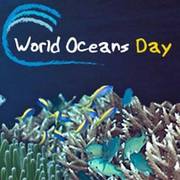 World Oceans Day is an international celebration of oceans and their importance to the planet. It also raises awarness about plastic pollution and the decline in numbers of marine wildlife. I want to celebrate the beautiful parts of the oceans, that we may not have in the years to come. That way, with a lot of effort from us, the reefs will get bigger, the fish and marine mammals will increase in numbers, and maybe, one day, we'll have plasticless oceans, instead of fishes ones.

I am organising an event on Saturday 9th June, which is open to the public. The objectives of the day are:

I plan for the day to include: