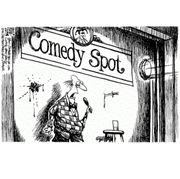 It's still just a fiver to get in (bring your own refreshments).

Returning to the Fringe as a standard bearer of upcoming young talent, Rotating Bill is hosting a collection of comedy geniuses, each with a unique style and flair to keep the selection a variety box of brilliance. Four perform each time with special guests every day!

Stanley Brooks – Do you need inspirating? Stanley has won King Gong at the Comedy Store, stormed it at The Stand and even been featured in the BBC radio award nominated Trimble. He’s here to help you get your dream job (admin). ***** Nouse

Edmund Colley – As a “Great Character Comic” (Scan) and BBC New Comedy Award Semi Finalist, Edmund has a surreal but misguided view of himself, providing a deranged but hysterical attempt to understand the world around him. **** EdFringe Review, ***** Nouse

Mary O’Connell – Scathing, playful, laid back and assured, Mary brings her hilariously haughty comedy to the fringe, having won the people’s choice vote in the Chortle Student Comedy Awards for London. ***** Nouse

Caitlin Powell – A flamboyantly furious comic with plenty on her mind to share, Caitlin brings an electric energy and fiery passion, from the biggest issues in the world down to the pettiest minutia. A tour de force of righteous anger. Chortle Student Comedy Semi Finalist.

Your MC for the evening will be the magical Chris Brosnahan.