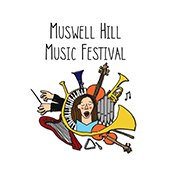 A programme of mostly classical music concerts is being performed in  churches  in Alexandra Park, Highgate, East Finchley.

The first concert is of music by J.S. Bach in St. Andrew's Church, Alexandra Park Road N10 - including a Partita for violin, Cantata, and choral music. July 8 at 8pm.

More unusual is a concert by the group Chapel Perilous, who 'use music and chant as a tool for meditation and discovery'. The concert includes music by medieval composers John Taverner and Hildegard von Bingen, and the modern composer Arvo Pärt. This is in St.Michael's Church, South Grove, Highgate N6 6BJ, July 9 at 8pm. Later that evening, the Gesualdo Six will be continuing the mixture of old (Renaissance polyphony) and new in the same church with Compline by Candlelight.

The last concert is in St. Andrew's N10 of modern music including The Passing of the Year by John Dove, and other works by Thea Musgrave, John Rutter, and more ... Pre-concert talk by John Rutter is at 6.30pm.