The Cinemas of Haringey - talk by Jeremy Buck 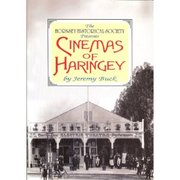 Jeremy Buck, local historian and author of "Cinemas of Haringey" presents an evening about the development of cinemas and cinema-going in Harringay, Wood Green, Tottenham, Hornsey and the surrounding areas.
From the earliest film shows in halls and theatres, through the first purpose-built "Electric Cinemas" to the lavishly appointed art-deco movie palaces of the 1930s, such as the Odeon, Muswell Hill - still showing films after 75 years- and the Gaumont Palace, Wood Green. Then the subsequent decline when most local cinemas closed down, what became of them after the final reel was shown, and the recent resurgence of the modern multiplex cinemas of today. Jeremy will feature all these aspects and more, illustrated with many historic and rarely-seen photographs, and will be signing copies of his book.

This is a FREE event and refreshements wil be available.

..was also a member of LTIAG - London Transport Industrial Archeology Group in the 1970/80s