The Big Green Bookswap at the Karamel Club 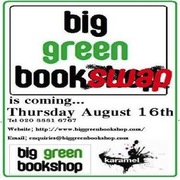 The Big Green Bookshop is delighted to host an evening of entertainment and literary chat at the Karamel Club as we announce the first of what we hope will soon become legendary Big Green Bookswaps. This is a different kind of book event, so expect the unexpected.

Here are the rules.
Bring along with you a book which you’re prepared to swap for another.
Enjoy a delicious buffet, provided by the wonderful Karamel Club.
Prepare to be entertained by two of the UK’s most exciting authors.
Those are the rules.

For our first Bookswap we’re overwhelmed that our guest authors will be Cathi Unsworth and Stuart Evers.

Cathi Unsworth’s incredible fourth novel, Weirdo has just been published to universal praise.
“WICKED WITCH OF THE EAST, the tabloids called her. Bloody Weirdo, is what the locals said. Corinne Woodrow was fifteen when she was convicted of murdering one of her classmates on a summer's evening in 1984, a year when the teenagers of Ernemouth ran wild, dressing in black and staying out all night, listening to music that terrified their parents. Twenty years later, new forensic evidence suggests Corinne didn't act alone. Private investigator Sean Ward - whose promising career as a detective with the Met was cut short by a teenage gangster with a gun - reopens the case, and discovers a town full of dark secrets, and a community that has always looked after its own.”

Weirdo is her finest work yet….the most deft and intricate piece of plotting of her career makes it an outstanding addition to the British crime-writing scene . . . page-turning and intense. ' --Independent on Sunday

'An absorbing mystery, an extraordinarily powerful evocation of time and place and a cast of characters whose every breath feels real Unsworth gets better with every book.' –Guardian

Stuart Evers dazzling first novel If This Is Home has just been published, following on from his incredible collection ‘Ten Stories About Smoking’.
“ Mark Wilkinson has three names. He left his own behind in the rainy north of England. American immigration knows him as Joe Novak. And at the Valhalla, the mysterious complex where he sells lofty ambition and dark desires, he goes by Mr Jones. Since he was eighteen, Mark has been running away. Running from his small town, his vanished mother, his broken father. But one night in Las Vegas, shocked by violence and ambushed by memories, he is propelled back to his real name and his real past. Back to Bethany Wilder: carnival queen, partner in dreams, and tragic ghost.”

'British fiction’s latest great hope . . . Slowly revealing its secrets, this book has a remarkable power to unsettle.' Graeme Allister, The Word
'Evers knocks out enviably beautiful prose, and the humming, muffled, air-conditioned neverland of Las Vegas is conjured up with a captivating and woozy effect . . . A compelling book.' Hugo Rifkind, The Times

All of Cathi and Stuart’s books will be available to buy on the night at specially discounted prices.

Tickets for this event, which include the buffet, are just £5 each, available online here, or from the bookshop. It would be wise to book in advance as we don’t know how popular this event will be.

The Karamel Club is a brilliant canteen bar and venue situated on Coburg Road (just behind Wood Green Shopping Centre). We’ve wanted to work with them for ages and so this team up is really exciting.
As it’s the first of our Bookswaps we urge you to come along and support it. We know you won’t be disappointed.