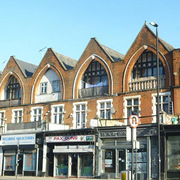 Shopping parades - rows of shops, often with flats or offices above forming a unified architectural composition - were built in large numbers in London in the later Victorian and Edwardian period, providing a retail hub for London’s burgeoning suburbs. Often designed in ornate and flamboyant styles, and in many instances incorporating pubs and banks, they illustrate the eclectic architectural tastes of the period.

The former borough of Hornsey has many impressive shopping parades, some of the better-known examples being in Muswell Hill and Crouch End. Highgate too can boast some fine parades in Archway Road, dating mainly from the 1880s and 1890s, which formed the architectural frontages to the new residential streets to the north and south, and were in some cases built by the same developers. Blighted for decades by the A1 road-widening proposals, they have suffered from under-investment, neglect and, not least, poor-quality shop fronts. Nonetheless, they define the character of this busy thoroughfare which forms an important part of the Highgate Conservation Area and is now experiencing a comeback as a local shopping centre.

The talk, focusing on Archway Road, Muswell Hill and Crouch End, will look at some of the best examples of this often under-appreciated building type, and also the surprising number of surviving Victorian and Edwardian shop fronts – now quite rare both in a local and national context - which are sometimes disguised by ad-hoc signage and cladding.