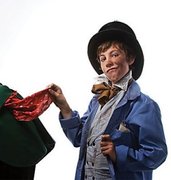 Charles Dickens came into this world during the cold February of 1812, the son of a debt ridden clerk at the Navy Pay Office. In 1824, his dad was taken from their Camden Town home and imprisoned in the Marshalsea Prison, Southwark (as described in Little Dorrit), for owing greedy bankers and seedy landlords a few miserable quid - this meant his mother and seven siblings were also treated to the same shockingly 'orrible fate. 12-year-old Charles was sent to work at a boot-blacking factory, earning six bob a week to help feed his family and pay off the debt - he really knew what gruel tasted like. Childhood poverty and feelings of abandonment haunted him and would be a heavy influence on Dickens' later views on social justice and reform and the world he would create through his fiction. In 1837 he wrote a 'social novel' about child labour, poverty and the hypocrisy of the age - Oliver Twist.


Oliver! is the pitch-perfect 1968 musical based upon that novel, that brings Victorian London to life - warts and all. The Kids Collective will be screening a sing-a-long version to which all urchins, pearly kings/queens, Dodgers, chimney-sweeps, Lloyd-Webber lookalikes, pick-pockets, Nancys, gin-swillers and their mums, dads and carers are cordially invited. There will be much Victorian entertainment and work 'ouse refreshment on offer though please...don't ask for more.


btw Any parents/carers that want to help with costumes or props for the kids/flower selling/singing/dancing/making music/etc - please get in touch with Dave on: 07966096482