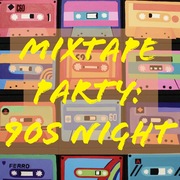 Oh yes, Britney Spears was dressed like an unruly school girl, Kurt Cobain was moping around like one, Big Pun was insisting he wasn’t a player, Jarvis Cocker was mingling with the common people, Moby was making everybody sad and Missy Eliot decided to wear an inflated bin bag. This was the 90’s.

Here at Craving Coffee we’re bringing it back to the good old days with our first themed Mixtape night.

So what happens? You come and drink to your favourite 90’s songs chosen by you. Just write down a request and we’ll stick it on, along with a few choices of our own. Bribes for skipping the music queue are accepted. Christmas songs will be vetoed and get you ejected from the building. The disco ball will be in motion. Wear 90’s outfits at your own risk. The establishment will not be held responsible for any ridicule suffered whilst sporting 90’s outfits.