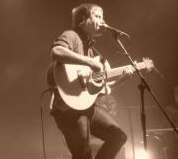 Chris Simmons, Johnny Steinberg and Madelaine Hart at the KMC

Back by popular demand with his outrageously ace new album 'The Boy Will Learn' in his hands. The king of South Coast, Simmons is a songwirter at the top of his game. He has performed with the likes of The Kooks, Suede, The Maccabees, Jackson Browne, The Von Bondies, Ocean Colour Scene, Seth Lakeman and many more. Thrilled he's back. No relative of Gene.

Johnny is almost impossible to describe. You just have to come and see him! He writes folk that basks in warm Northern wit and he'll have you singing along to his stuff before you?ve even heard it. Think Peter Kay meets Jonny Cash. It's pretty hard not to love him.

A unique voice that sounds like it's been drizzled from a bottle of Nina Simone and Nick Drake vinaigrette and shaken on to a gentle bed of Folk leaves. Taking a break from touring with Baxter Drury to come and sing for us.