Mad Staring Eyes are an amazing band from North London. Their line up includes pedal steel and flute and revolves around a core that have played together for 20 years.

In 2006 Mad Staring Eyes self-titled debut EP won the John Peel ‘Best New Band’ award and they played Glastonbury Festival that year. They’ve recorded at The Cowshed Studio up the road and drummer Oli grew up with Nell in Primrose Hill no less!

They will be playing at The Step on Friday 14th June at 8pm. It’s £5 on the door and it’s set to be a fantastic night.

They have toured in the USA, UK, Canada, Russia and Germany and played international festivals such as South By South West (Austin, Texas), North By North East (Toronto) and CMJ Music Marathon (New York).

Their new album was recorded live onto tape using all vintage gear (including The Pogues’ 1962 Ludwig drumkit) and draws on influences such as The Band, The Mamas and the Papas, Bruce Springsteen and Fairport Convention. 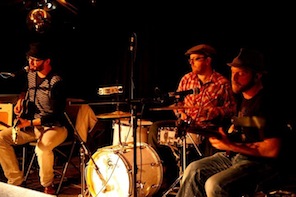