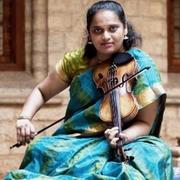 Carnatic Nomad is a South Indian classical crossover project. Jyostna Srikanth is an Indian violinist in Europe and composer known for her versatility and ability to collaborate with different genres seamlessly and with ease.

She is intensely rooted in south Indian classical music alongside having formal Western Classical music education. Adding on to this, she has flourished as a performer and composer, exploring lush ground in the crossover between Indian music and a variety of world music and contemporary flavours. Her violin playing has a nice blend of musical expression and emotion with good technique, a result of three 'decades of experimentation' as per a critic.

Jyotsna is also the Artistic Director of the London International Arts Festival.