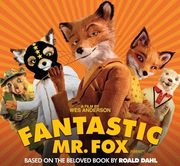 A gem of stop-motion animation, this story of a quirky Mr. Fox’s struggle with the local farmers is a lush sonic and visual experience.

With the voices of George Clooney and Meryl Streep in leading parts of Mr and Mrs Fox, the film features an imaginative and idiosyncratic soundtrack that takes you into a wonderfully bizarre world of Wes Anderson’s animation.
*with an introduction by Steve Browell, one of the creators of the film’s soundtrack.

Part of SOUNDS OF CINEMA season at Green Lens Studio