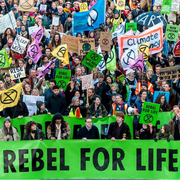 Muswell Hill Sustainability Group will be supporting Extinction Rebellion (abbreviated to XR) in a ‘DIE-IN’ in St James Square, N10 on Saturday, 13th April to highlight the Climate Emergency.

Local people – dressed in black – will take over the square, lying down in silence from 11.15 am for 15 minutes. This action is to represent the threat both to humanity and all other life forms by our own, and other, governments’ long-overdue and inadequate action to prevent climate change.

Following the ‘Die-In’, shoppers and local residents will hear speeches by Jayne Forbes of XR, other young people (members of XR) and Cara Jenkinson (Chair of Muswell Hill Sustainability Group).

Members of the public will also receive fact-sheets about the havoc being wreaked by climate breakdown.

Quote: “The inaction of the government will no longer be tolerated. I’m speaking to all young people: do your part – join groups like Extinction Rebellion and become part of the global family that’s fighting against climate change. Young people are the key to change… we will be heard, and we will create the change we wish to see.” Safi Jenkins (age 17)

At 1pm, Catherine West MP will take part in a debate on Haringey in a time of Climate Emergency
at the British Legion Hall, Muswell Hill Road, N10 3NG.

Extinction Rebellion is a socio-political movement intending to utilise nonviolent resistance in order to avert climate breakdown, halt biodiversity loss, and minimise the risk to human extinction and ecological collapse.

1. The Government must tell the truth about the climate and wider ecological emergency, reverse inconsistent policies and work alongside the media to communicate with citizens

2. The Government must enact legally binding policy measures to reduce carbon emissions to net zero by 2025 and to reduce consumption levels

3. A national Citizen’s Assembly to oversee the changes, as part of creating a democracy fit for purpose.