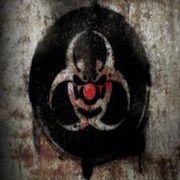 Is this the most outrageous marketing campaign ever, or just a coincidence?

For as long as anyone can remember, the Clowns and Humans of Blueville have co-existed peacefully. Sure, each species thinks the other is a little weird but that's never been something to fight about.
Until, that is, a series of freakish terrorist attacks - seemingly perpetrated by clowns - turn the two bloodlines against each other. When war breaks out, the future of both species hangs in the balance. It's going to take a suicide mission to stop the carnage and only misfit circus trainee Colin Clarke and his three best friends have the courage to volunteer for this impossible task.
Their quest takes them to the mean streets of Cheadle, the most dangerous city in the world. There, in a final bid to defeat their true enemy, they must confront the darkness lurking at the very heart of clownkind.

BGBS have finally pinned these two authors down and persuaded them to visit the bookshop on November 17th, to discuss this amazing book (and maybe to answer a few questions).

It’s a launch, it’s a party, it’s an interrogation, it’s FREE and it’s going to be spectacular.

You won’t want to miss out on this very special event.