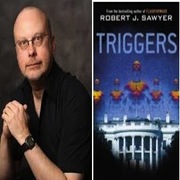 Rob's over in the UK to appear at Cambridge University to speak at the Darwin Lectures, but he's kindly agreed to visit the bookshop whilst he's here.
The author of 22 novels, Rob is one of only eight people in history to have won all three of the science-fiction field’s top awards for best novel of the year: the Hugo (which he won for Hominids), the Nebula (which he won for The Terminal Experiment), and the John W. Campbell Memorial Award (which he won for Mindscan). In addition, he's won an Arthur Ellis Award from the Crime Writers of Canada as well as eleven Canadian Science Fiction and Fantasy Awards ("Auroras"). The ABC TV series Flashforward is based on his novel of the same name.

His latest novel, Triggers, is published by Gollancz;

"The president of the United States is shot in the head by a would-be assassin. Rushed to hospital and barely saved from death, he discovers that he has new memories - memories that are not his own. A scientific experiment has gone awry, and a small group of people now remember each other's lives.

And when one of those people's lives involved access to the most secret and dangerous information in the world, everything will change."

You can find out more about Rob at his website here.

Rob will read from his books and also to answer any questions you may have.
This is a FREE event, but if you plan on going along, please let the BGBS know, so they can add you to the list.

Refreshments will be provided.